The Veterans Legacy Memorial (VLM) is a digital platform launching in late May 2019 that will enable families, survivors, and fellow veterans to take a leading role in honoring their beloved veteran. The site will help the National Cemetery Administration (NCA) build up the community around memorialization, improve on-site cemetery experiences, and extend the experience to people accessing the memorials online. The development of this ambitious project, from inspiration to full-featured platform, took less than two years. Built on millions of existing NCA records in a 25-year-old database, VLM is a powerful example of an agency harnessing the potential of a legacy system to provide a modernized service that better serves the public.

In the spring of 2017, NCA’s Dr. Bryce Carpenter was ushering a group of college students and professors around the Florida National Cemetery, one of over 100 cemeteries NCA manages. Looking out over the 150,000+ plots, he was struck by the variety of visitors. Veterans’ family members, service organization personnel and volunteers, research scholars, Civil War reenactors, grade-school students on field trips, and many others were there to remember, research, inspire, and serve.

But Dr. Carpenter also noticed there were also people missing. Disability, distance, and other logistical difficulties can make traveling to a deceased service member’s memorial site difficult or impossible for many who would like to do so.

To make the memorial experiences and information accessible to a much larger community, Dr. Carpenter proposed developing digital counterparts to the physical memorials that NCA maintains. Each fallen service member would have a profile prepopulated with public information from NCA databases, allowing family members, students, and others to learn about the individual without necessarily making a physical cemetery trip. Loved ones could input additional details in the veteran’s digital memorial, providing further richness and fidelity to the veteran’s preserved legacy.

A little seed money gets the MVP going

To make this idea for an online memorial a reality, Dr. Carpenter responded to an RFI from the Veterans Affairs Center for Innovation (VACI), now the VA Innovation Center (VIC), winning $500,000 to develop a prototype. The startup capital allowed him to work with a contractor to build a mock-up of the digital legacy product.

The scale of the idea was big. Three million veterans are buried in NCA cemeteries, and Dr. Carpenter was proposing to have a detailed, expandable profile for each of them. The IT considerations – server strain, database connections, permissions provisioning – were intimidating. But in starting with a minimum viable product (MVP), rather than an enterprise IT solution, the team was able to put aside the technical distractions, instead focusing on what users could experience on the site. They created a demonstration for what the eventual site would look like and how users could interact with it, and they determined what the full-fledged version might cost, all within a roughly eight month timeframe. Creating and testing this prototype helped the team confirm that existing NCA data could provide the information needed to populate veteran profiles. 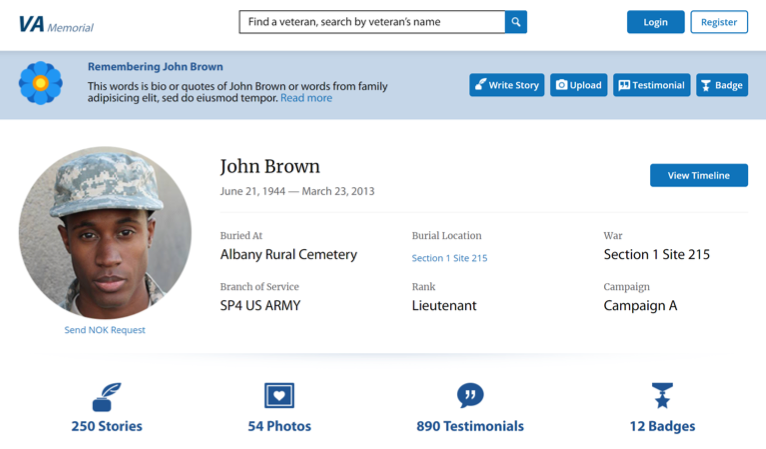 A veteran’s profile page from the prototype site developed with the help of VA proposal funding.

From scrappy startup to a full product team

Deploying this ambitious application would take project managers, privacy and security teams, Section 508 compliance specialists, designers, engineers, architects, and integrators. In other words, it would take a lot of funding.

As a sub-agency under the Department of Veterans Affairs (VA), NCA had no IT accounts of the size needed for this type of large project. And Departmental IT dollars for the year were already allocated to other efforts. The MVP proved an important demonstration tool for Dr. Carpenter and his small team to convince leadership to reprogram funding for the project, as the leaders were on board with the objective of repurposing existing NCA data to make veteran memorial information accessible to a much wider community. Once leadership provided the go-ahead, Dr. Carpenter was able to assemble a team of dedicated professionals, and the pace of development sped up considerably.

“It’s a very aggressive timeline – but I think that’s a good thing, if it had been 5 years it would have turned out like any other government project – bloated and delayed. The short timeline, however, has forced us to inject clarity into the process and get a quick consensus to move forward. We have been hitting every benchmark in our dev timeline early.” ~ Dr. Carpenter

The challenge and opportunity of building on a legacy system

To populate the digital legacy profiles for the Digital Memorials, the development team needed a comprehensive data source, and they turned to The Burial Operations Support System, or BOSS, one of NCA’s vast databases. Launched in 1994, BOSS is the system NCA personnel use to schedule burials, assign plots, order headstones, and complete other administrative functions. While the 25-year-old system has held up well for the tasks it was designed to handle, it was not designed for the use that Dr. Carpenter had in mind and lacks some modern features, such as geospatial information to help people find the physical locations affiliated with each record it maintains.

Despite the pain points typical of working with a legacy system, the development team was able to establish the necessary interlinkages for the memorial application, as well as improve BOSS’s functioning more generally. The team has, for instance, already developed protocols for mapping cemeteries and incorporating this information into BOSS.

The future of VLM 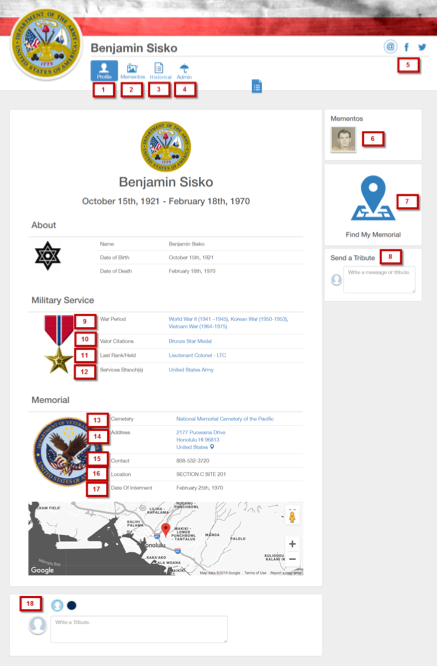 A screenshot of the project reveals how design choices have evolved since development of the MVP and how NCA data are rendered human-readable.

The site goes live by May 20th, at which point friends, loved ones, researchers, and everyone in between will be able to view profiles and help add to existing information on the legacies left behind by our fallen veterans. But the project doesn’t stop there. The team plans to expand the platform to include veterans buried in cemeteries maintained by state and local governments, and, eventually, those buried in private cemeteries as well. The permissions structure will also evolve to allow living service members to plan out who will administer their digital memorials when they pass on. The team will continue to develop the product, enabling more customization and features to help everyone get the most out of NCA’s existing information and the shared knowledge of online visitors.

Above all, VLM will be a tool to make NCA’s data more accessible. It will improve the on-site national cemetery experience by reframing how we memorialize Veterans. NCA’s mission is to memorialize Veterans in perpetuity, and Dr. Carpenter’s project will include the American public in that shared national expression.

If you’d like to learn more, please contact VLM at VeteransLegacyProgram@va.gov. You can also check out NCA’s data.va.gov data story for more about its coverage, mission, and locations.